From time to time, financial markets get disconnected from reality. Though there are few occasions where this has happened to the same extent as it has over the last three months. Economies around the world have been plunged into recession, a billion or so people have been told to stay at home, and whilst the prevalence of the virus has started to recede in certain economies, at the global level the pandemic is still accelerating. Yet investors have become increasingly more optimistic since March, reflected by the rally in global equity markets over the last few months.

Things have certainly improved in Europe and the US since the first peak of Covid-19 infections in early April. Lockdowns have had a positive effect albeit some have had more success in places than others. Nonetheless, they also caused the worst quarterly contraction in economic activity in history. As cases have come down to more manageable levels; around 2m active cases in the UK were estimated around the start of April, though recent ONS data suggests there are now just 33,000; economies have started to re-open. Progress remains slow though, and we are still a long way from the previous “normal”.

At the same time, the prevalence of the virus has increased significantly in the developing world. Countries such as Brazil, India and Mexico all have huge outbreaks, with much less advanced healthcare infrastructure to support their societies. Moreover, in recent weeks there has been a resurgence of cases in the southern states of the US, with the country as a whole recording a new record daily number of cases as late as last Friday.

In that context, it is somewhat amazing that investment markets have rallied so significantly since the market lows in March. Part of the reason is due the improvements seen in virus’ trajectory in the developed world, but to a greater extent it has been driven by the policy response from Governments and Central Banks.

In the last recession, the Global Financial Crisis, both Central Banks and governments reacted by cutting interest rates and pumping money into the system. This time, in the Global Health Crisis, they have done the same, though did it quicker and to a much greater extent. Take the furlough scheme in the UK, it is estimated this is currently covering 9m jobs. Investors have felt reassured that policymakers will do “whatever it takes” to support economies, theoretically putting them in a better position to bounce back once a solution has been found.

The summary from quarter two is therefore an extremely dire economic situation but a more positive market environment. As we will detail in the next section, we expected both, though at some point something will have to give; either the economy will need to catch up or the markets slow down. Which one of those two things occurs’ is in the main in the hands of the various vaccine candidates, and the progress towards mass immunity, though for now at least it seems policy support is winning the battle with economic uncertainty.

The portfolio range returned between 4.73% Very Low and 18.72% (High Risk) across the second quarter, taking the year-to-date returns to between -1.14% and -2.96% depending on the risk profile selected. Over one year, all of our portfolios are now in positive territory.

In our April update we wrote that we were pleased with the downside protection offered in the market sell-off, and although it could have been better, holding the assets that would have improved things further (government bonds) would have held us back when things ultimately improved. This was predicated on the view that once lockdowns were imposed, the virus trends would improve, and policymakers would react to support the system. We therefore used the market correction as an opportunity to increase risk into select areas that had been hurt indiscriminately through the equity and debt (bonds) of ‘quality businesses’.

We have talked about ‘quality businesses’ a lot across previous blogs, so what do we mean? Well these tend to be businesses that have a high portion of recurring income streams, i.e. repeat customers, low levels of competition, strong balance sheets and top management teams who have a history of delivering shareholder value across many different economic periods. Examples that are prevalent throughout the portfolio range are Microsoft, Amazon, VISA, and Games Workshop. As markets have come to realise that the economic shock effects certain businesses significantly more than others, these have performed strongly, contributing nicely to the overall outcomes.

Both decisions; to increase risk, and then specifically where to allocate that risk; helped across Q2. Combining that with the activity in Q1 where we reduced risk early in the pandemic to become more defensive gives a simplified picture of how we’ve altered the portfolios. Pleasingly, we can compare the journey clients have achieved compared to had we done nothing, which on average has added around 2% to their overall outcome since January e.g. the Low to Medium YTD return of -2.70% would have been -4.91% had we left things.

Moreover, it’s important to say that we expect the benefits of the activity we completed so far this year to be felt for many more months to come. It was in this respect, the first time in 5 years where we have been able to find good value in lower risk assets for clients. Sat in January on the back of a positive 9% year for Low Risk, it was difficult to see where we could sustainably achieve 2-3% for 2020, however as we sit today, although returns are slightly negative to date, the opportunity we have at our disposal for the next 5 years has improved considerably.

That fuels our confidence that the portfolios are positioned very well for the environment ahead, albeit an environment that is highly uncertain, and one that will potentially quickly evolve based on a number of key factors. Remaining active in our management of the portfolios is going to be vital therefore, as we continue to strive to build on the good work achieved in 2019 and 2020 so far. 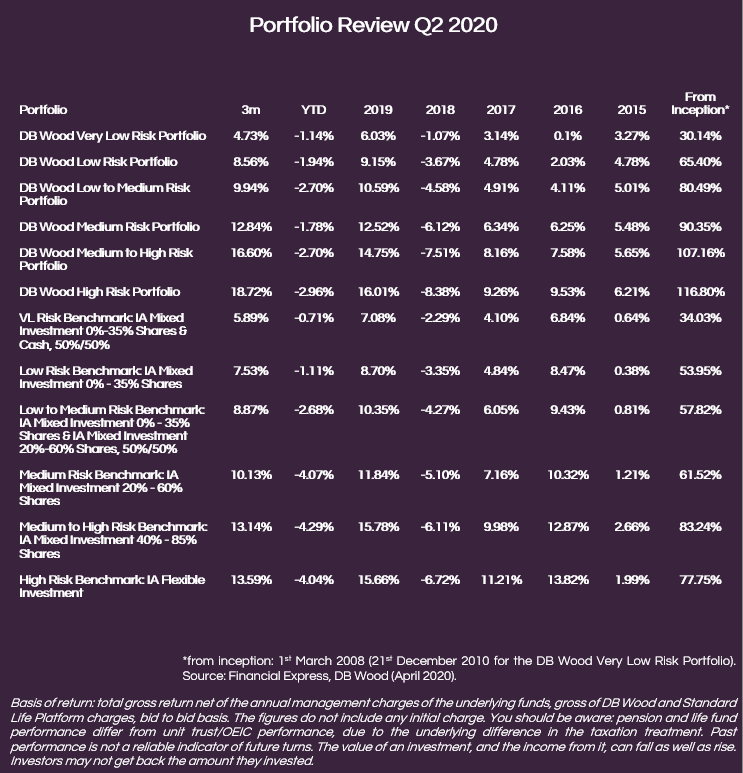 Investors have to prepare for two possible worlds as we head towards 2021; one with a vaccine, and one without.

Taking the later first – the recent easing of lockdowns across the developed world has given us clarity that whilst certain restrictions can be eased, it is not going to be possible to go back to a pre-Covid normal in absence of a vaccine. We have seen mini lockdowns in Germany, more severe outbreaks in the Southern US states, and this week our own example of a localised issue in Leicester. Flare ups are going to happen, and vigilance will continue to be required. This means that whilst economic growth can bounce back from the lockdown lows, it is highly unlikely it can get back to previous levels for some time. We expect a strong bounce in the very short term, though without a vaccine it is not sustainable.

The challenge facing the world is that the support for so many jobs and businesses, either via the furlough scheme or other means, is planned to tail off through the summer and into the autumn. Without the corresponding rebound in activity, businesses will have no choice but to lay people off, a long term headwind for developed economies. Expect Central Banks and governments to keep their foot on the peddle then, as it is in no-one’s interest to let unemployment spike and the economy falter.

This world will remain a challenge for investment markets, but the policy support should continue to give them reassurance. Our focus on quality businesses that are less affected by the situation will remain, and we should expect them to perform well. In addition, the level of income generation we are now receiving from lower risk assets should allow the portfolios to move into positive for the year, even if markets cannot move markedly higher.

The second world, where perhaps Oxford University come out with undeniably positive vaccine results, would be very different. Once that occurs, populations will aim to be inoculated within say 4 months, allowing for a quick resumption of ‘normal’ activity. Consumers and businesses in the main will have been able to survive on government support, and will be ready to ramp activity back up. Super low interest rates and oil prices will also benefit consumers whose disposable incomes in many cases will be better than they were at the start of the year.

This is a very positive picture economically, though it would require some changes to our strategy at the portfolio level. Equity markets would certainly move higher, but may be driven by those sectors who have been in the doll-drums; leisure, retail, travel; as businesses here bounce back strongly. We do not have a lot of exposure here currently, as you would expect. We may also see different investment themes arise that have not for a number of years, such as higher prices (inflation). This is a scenario we are spending a lot of time planning for then, as even if it doesn’t come to fruition for some time, we want to be prepared for when it does.

In both of those alternative realities we will have two key political outcomes to contend with; Brexit negotiations and the US election. At the time of writing it seems Brexit negotiations are going to remain uncertain, and Joe Biden, not Donald Trump will be elected President. However, a lot can happen in four months, so we will be watching these two developments closely, and altering our positioning as things evolve.

In summary, the outlook continues to remain very uncertain, but we can point to a select few variables that will determine where we end up; success or not of a vaccine, Brexit progress and the US election result. At the minute, we are positioned cautiously, with risk concentrated in quality companies who are best placed to navigate this environment well. We have some protection in place in case a second wave becomes overwhelming and otherwise are favouring assets with strong income streams to keep the portfolio returns slowly trickling in. We are very aware this pandemic is a long way from over, and there are a variety of ways the environment could change. Our diligent investment process and flexibility put us in the great position to deliver for our clients, which is exactly what we are determined to do.

Financial planning and investing are intrinsically linked, though we are often asked for investment tips without regard for any plan… “what can I buy to …

The economic environment looked set to improve in 2021. We entered the year on the back of successful vaccine news, with a roadmap …