You might say the lunatics have taken over the asylum. The pattern of Europe’s elections has seen old elites buffeted and battered by populist movements. In the UK’s case, the extremists have taken charge of the governing parties. The choice at the coming election does not involve the previously craved ‘middle’ ground, but is instead split between the English nationalism of Boris Johnson’s Conservatives and the far-left socialism of Jeremy Corbyn’s Labour party.

The common perception is that this will be a pivotal election — one of those moments that sets a nation’s course for a generation. Anyone who cares about Britain’s future is likely to hope that it is otherwise. The campaign has marked out a contest between parties peddling competing fantasies, and we are forced to debate what would be the most damaging to the UK economy — a hard left Labour government, or a hard Brexit under the Tories. Neither appeals.

For Mr Johnson, Brexit is no more than an “oven-ready” loaf, and against all the odds, he is winning on the character question. The latest polling from Ipsos Mori shows the Prime Minister with a personal approval rating of only 33%, a level of love that in most elections would mean almost certain defeat. However, Mr Corbyn wins the unpopularity stakes by some margin, with a rating of just 24%.

So, with crunch time just less than a week away, let’s cut the rhetoric and look at what the main two parties are promising:

The judgment of the people is more important than either programme, but nonetheless, what do we see?

Labours’ manifesto is much broader, clearly aiming to wow votes with their revolutionary ambition. Huge increases in public spending and a radical restructuring of the economy are the main focusses; a network of new investment banks, nationalisations, forced transfers of shares to workers, a bigger role for trade unions and higher taxation to name a few examples.

The promise to deliver huge planned increases in investment brings big question marks though, not least in the green economy. Labour is promising a “net-zero-carbon energy system within the 2030s”. That is improbable. Moreover, given that the UK produces just 1.2 per cent of the global emissions of greenhouse gases, maybe the question should rather be how Britain might help deliver a global solution. More widely, the economic impact of this hugely expansionary programme is likely to trigger significant currency volatility. The Bank of England might even be prevented from raising interest rates, and inflation would likely also rise – not a particularly positive cocktail for the average Briton.

What about the Tory’s approach then? Well it certainly isn’t without fault either. Uninspiring would be a fair characterisation. Our great country is in dire need of improvement in some crucial areas; schools, the NHS, infrastructure such as road networks… the list goes on. A few hundred police officers and some extra nurse training isn’t going to cut it. Plugging the potholes instead of building new bridges is my metaphorical summary.

Moreover, economically speaking, many think tanks have estimated that Labour’s Brexit programme — renegotiation and another referendum — is far more attractive than Boris Johnson’s follies. His focus on captivating the hopes of many who “just want to move on” have led to the renegotiation of quite a hard form of Brexit. At what cost then.

Away from my cynical criticism and back to the polls, so far, the evidence suggests more people are leaning to the Conservative vote. The average poll is predicting a 12% lead, but there are still a number of factors to be wary of. For one, around 10% of people still “don’t know” who they will vote for, enough to provide a crucial swing either way. More importantly, we should remember that polls are just predictions – on average they miss voting percentages by 4%, and the difference between a 12% conservative party gap and an 8% one, is considerable when it comes down to seats.

So it is going to be close, we know that, and any developments over the next week to capture the hearts of the “don’t knows” could make the difference. As we have said before, trying to predict the outcome to such a binary event is a fool’s game, so instead of placing bets in one camp, we have been sure to spread exposures to ensure all portfolios remain balanced and can benefit whatever the outcome.

However, one thing we think is worth outlining, is what we expect to happen to the main asset classes in each eventuality: 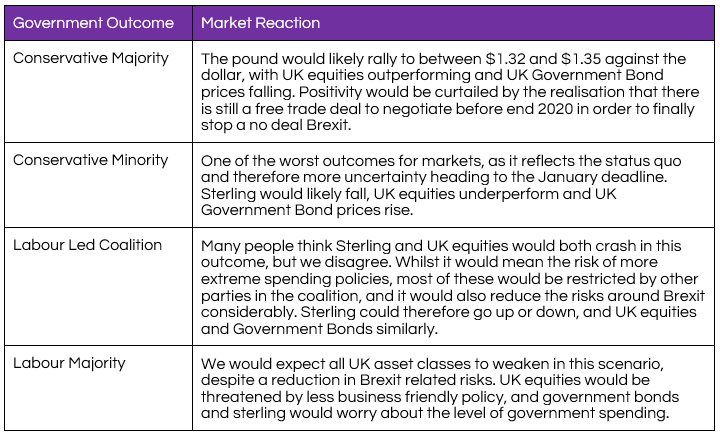 Looking objectively, our central case is that Mr Johnson will get over the line. Due to the aforementioned factors, it is impossible to predict this confidently, but it is also hard to believe that Labour can engineer a real tactical shift that sufficiently narrows the Tories lead. Either something big needs to happen, or the polls really are broken. And with Mr Johnson running a more disciplined campaign than expected, even down to evading a possible interview with Andrew Neil, he is clearly mindful that it is his to lose.

To summarise, despite this being one of the fiercely contested and personally motivated votes in memory, in addition to my personal concerns with both main election options, our focus remains on assessing the likely market effects and ensuring all portfolios are protected. Both manifestos offer different options that will appeal to different sub-sets of the population, and therefore strengths and weaknesses depending on your point of view. One things for sure, it will be a historic night, and as far as investment markets go, not just an event to be wary of, but also one that will create investment opportunity, so we will take the positives where we can!

As part of our blog schedule, periodically we will be providing interesting updates from the wider team at DB Wood. In our first issue we …

The world we live in never ceases to surprise us. Reflecting on our New Year’s resolutions we’d be forgiven for thinking that leaving the European …