After a positive first three quarters, investors were expecting more challenges in Q4. The geopolitical risks surrounding US-China trade negotiations and the UK election outcome were both firmly on the horizon, both of which had the potential to disrupt the positive momentum. The unlikely double of a trade deal and landslide Conservative majority would no doubt be welcomed with open arms, leading markets higher into year-end.

Starting on the trade front, Mr Trump has frequently showed a willingness to toy with China, using them as a political weapon to gain American popularity. However, the closer we get to the US election next year, the more important the strength of the US economy and equity markets (both of which provide voter confidence) are to his chances. It was therefore not a surprise to see him strike a “phase one” trade deal with the Chinese in December. The detail of the deal leaves a lot to be desired, but markets enjoyed the certainty nonetheless.

Here at home, the highly anticipated UK election produced a Conservative majority government. It was the manner of the victory that was more astounding than the result however, with an 80 seat majority achieved and some constituencies turned blue for the first time in 100 years. Within a few days Mr Johnson timetabled a second vote on his Brexit legislation, with it comfortably passing by 124 votes, meaning we will now leave the EU by law on 31st January. If ever we needed a reminder of how powerful a substantial majority government is, for reference the first Brexit vote of 2019 lost by 230 votes.

Both developments were seen as positive, as equity markets rallied and the pound rose. UK equity markets in particular enjoyed a strong run, with the FTSE 100 returning 3.35% in the final three months of the year compared to a global equity benchmark at 1.16%. However, in some areas returns were amplified – bank stocks for example rose heavily, as did UK infrastructure, as some political certainty was restored.

Overall then, 2019 finished as a strong year, despite sentiment starting the year in fear of a global recession. For most of the year economic data was poor so the outcome is pleasing. The rationality and sustainability behind the returns is of course a major point for discussion.  Why was it so good given the environment? Once again, Central Bank support has been a big factor, with many cutting interest rates in order to stimulate confidence. This has not just benefited equity markets, but nearly all assets including bonds and alternatives have rallied as interest rates have been cut.

Add this to a final quarter that involved the two aforementioned important political resolutions and you can see why investors have enjoyed a strong 2019. However, as we look forward, there are important questions to be answered in 2020. We will outline those in our outlook, but before that let’s summarise how the portfolios have performed.

All returns were therefore well above our targets, although it is important to remember that these are set over a rolling five-year time horizon; some years we will overachieve, and in others we will underachieve. After a challenging environment in 2018 which finished on the worst final quarter for markets in decades, 2019 was certainly a year with more opportunity.

Much of the growth in the first half of the year was driven by our decision to add to equities as markets were falling in late 2018. It may feel strange to be talking about this over a year later, but it is often the case that key decisions provide benefits over multiple years. So as equity markets rallied across 2019, the portfolios benefited from our increased exposure.

Specifically focussing on the last three months, our decision to utilise the opportunity in the UK was crucial. Global investors have for some time shunned the UK, concerned about the political uncertainty… we can’t exactly blame them! This has led to our market being significantly cheaper than overseas comparisons, leaving room for improvement if certainty is restored. Mr Johnson’s election win did just that, and whilst the UK isn’t out of the Brexit woods just yet, we can certainly see the clearing. Holding a strong level of exposure to the UK was therefore beneficial in the month of December, adding to the good work completed in the rest of the year.

But whilst the overall return outcomes look impressive, there was still areas we would have liked to have improved in 2019. For one, our fixed income bucket underperformed its peers, albeit still producing a solid positive outcome. Secondly there were decisions we could have executed better, in order to further enhance returns. Nonetheless, in total we made 27 changes to the portfolios across the last year, and whilst not all 27 were perfect, overall it is pleasing to see that in aggregate returns have been enhanced by 1.85% on average over 2019 i.e. Low Risk’s 9.08% return would have been 7.23% had we not made alterations through the year.

In summary, the portfolio range has performed well in 2019. Nonetheless, we should also remember that a year in isolation is not a long time in investment markets, so the hard work continues in order to maintain our excellent longer term numbers. Moreover, having identified further areas for improvement, we will continue to aim to be better this year than we were last. To that end, the numbers will now reset as we once again work towards the aim of delivering our target returns in 2020. 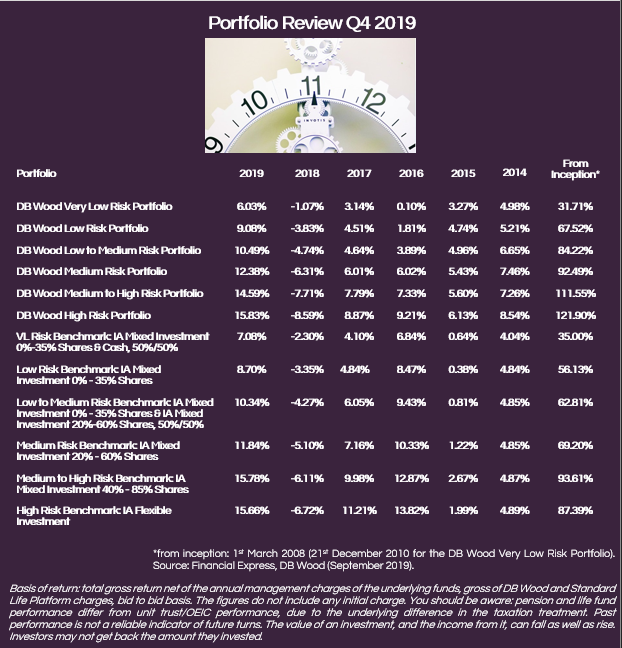 The global economy is likely to remain subdued but solid in 2020, benefiting from last year’s Central Bank stimulus and this year’s increases in government spending. Consumers should be happy that inflation and unemployment are low, and we now have more political certainty with a majority government in place here in the UK and the first part of a trade deal between the US and China setting a positive tone. However, we must also remember that just as things quickly improved from the recession fears of 2018, it can easily turn the other way.

Starting with politics, Mr Trumps initial trade deal is little more than a photo moment in our view. Moreover, his behaviour is volatile and hard to predict, something we are keen to remind ourselves. How will he behave if his popularity starts to dwindle heading into November’s US election? Would he start risking things if he has a strong lead? All this is nearly impossible to predict, but will become more prevalent as the year goes on.

Here in the UK we now have a limited 12-month time horizon to negotiate a Free Trade Agreement with the EU. Our belief is that this will ultimately be signed, with more chance of a positive surprise than a negative, but that doesn’t mean the risk of us falling out of the EU with no trade deal at the end of 2020 is 0%. So this is again something we have to watch closely.

Moreover, markets have very recently been on a strong run. Some regions look relatively expensive at the time of writing; the US being a key example; whereas others such as the UK and Emerging Markets still sit at significant discounts. Opportunities are therefore harder to come by than this time last year, when nearly all markets were cheap.

This isn’t to say we are negative about the outlook, more that we are wary of the risks. More generally, in addition to strong economic fundamentals, it is likely the Central Banks and Governments continue to offer support as the year goes on. A fiscal package in the UK is likely to be announced in the March budget for example. Perhaps other European countries will follow. These are all positives, albeit need to be delivered.

“Cautiously optimistic” is perhaps the most overused word in the investment industry, but it certainly characterises our current stance. We enter the year with a good allocation to specific equity markets, and then a diverse range of alternative exposures where we will be looking for consistency rather than shoot-the-lights out results. Solid fixed income allocations, global infrastructure, and specialist areas of UK property are areas where we remain positive, and provide a solid base for our equity allocation for the year ahead.

2020 is therefore set-up to be a positive year, but as always it will depend on several factors falling into place. A portfolio comprised of a diverse range of great ideas in addition to a nimble investment approach is a pretty good place to start.