After a strong first half of the year, we doubted whether investment markets could continue their upward trajectory across the summer months. Resolutions to issues such as trade uncertainty and Brexit would be needed, both of which end this quarter pretty much where they started; without progress. It is therefore not a surprise that the third quarter was more challenging than its predecessors.

The biggest area of focus for investors has been geopolitical risk, which has continued to rise across the summer months. Twelve months ago we felt there was a good chance a trade deal between the US and China would be struck in short order, but despite various positive murmurs, things have progressively worsened. Tariffs between the US and China were escalated further in September, and there is now another round planned before the end of the year. We will discuss our updated view on the outlook in the third section, but for now things are looking bleak.

Middle eastern tensions have also risen more recently, after Iran’s attack on the world’s largest oil facility in Saudi Arabia. Trump was quick to slap sanctions on Iran, and there seems no willingness from both sides to get to the table and agree a compromise. This then just adds to the uncertainty, all at a time when economic growth is slowing.

In our last quarterly update, we noted early concerns over growth rates in certain regions. However, since then the slowdown has broadened, with nearly all regions seeing downgrades in both current and future growth expectations. The trend is being led by a global manufacturing recession, which is in no small part due to the US-China trade war. All combined, this has led some commentators to conclude that without a resolution, the global economy could be slipping into its first recession since 2009.

Given all that, how then have equity markets finished the quarter about where they started? The FTSE 100 and MSCI World (benchmarks for UK and global equity markets) returned 0.26% and 2.44% respectively between 1st July and 30th September after all.

Well for one, central bankers have come to the rescue again. Rewind 12 months, and the US Federal Reserve were raising interest rates to dampen strong growth. However, in both main summer meetings they voted to cut interest rates, supporting the economy in the process. This is a theme that has consistently been replicated throughout both the developed and emerging world, reassuring investors that policymakers will continue to offer support.

Secondly, whilst manufacturing sectors are showing weakness, consumers remain in a good place. Wage increases are still above inflation levels in the UK and US, household debt is sustainable and confidence still good. Moreover, western economies are much more dependent on consumption than manufacturing, so this is again allaying fears.

To specifically comment on the UK, it is amazing to think that the last time we wrote an update we were still unsure who the next Prime Minister would be. Since then, Boris has taken office with a determined agenda to take the UK out of the EU on October 31st “do or die”, Parliament has implemented legislation to block a no-deal, and despite various calls for an election to break the deadlock, we are now just a few weeks away with a considerable number of possible outcomes, none of which seem highly likely. Significant uncertainty is the summary then, and UK economic data reflects that; Q2 GDP showed a 0.2% contraction.

Overall then, investors are trading off rising geopolitical risk and manufacturing weakness, with central bank support and resilient consumers. We will discuss in our outlook which of these themes we believe will dominate moving forwards, but over the last quarter the environment has meant that safe havens such as bonds and gold have done well, and equities have tread water.

All of the key asset classes contributed, as our equity, bond and alternative allocations posted positive results across the quarter. Given the backdrop of increasing trade tensions and further Brexit uncertainty, we were pleased to have added to the strong returns that have been achieved so far this year, even if only by a small margin.

That leaves 2019’s figures looking very healthy. We have talked before about needing to wait for the benefits of the work conducted in Q4 2018. Back then equity markets were suffering, and we took the contrarian call to add into that weakness. As we expected, much of the concerns were overblown, and as things improved, the portfolios benefited.

Much like Q4 2018, the last three months has been an extremely busy one for our investment team. However, on this occasion, to reflect the increased level of economic uncertainty, we have altered the portfolios to be more defensive. Changes include reducing the level of equity exposure in all portfolios and adding to positions in more defensive bond sectors and gold.

Importantly, despite the level of risk being reduced, we are still finding good opportunities in specific areas. Social care related property and global infrastructure are two examples that are now well represented throughout the portfolio range. In addition to supportive long-term demand and supply dynamics, both offer very sustainable income streams above 4%, something that is extremely hard to come by given ultra-low (and falling) global interest rates.

Many clients will naturally question whether the portfolio changes we have been making have been paying off. This is an important barometer for our investment team and is something we actively track in order to assess the value we add. Pleasingly, since the start of the year, when compared to the returns we would have achieved had we not made any alterations, returns have been enhanced by around 1.6% after costs. Nonetheless, the hard work continues to ensure this is replicated over the months and years ahead.

Finally, after taking constructive client feedback, we have altered the way we report our returns data on a quarterly basis. Instead of showing cumulative data, which is naturally quite volatile, we will now work on a discrete basis to reflect calendar years. We agree that this is both clearer and more transparent, however, if anyone would like to receive cumulative data under the previous format, we would be happy to provide that on request. 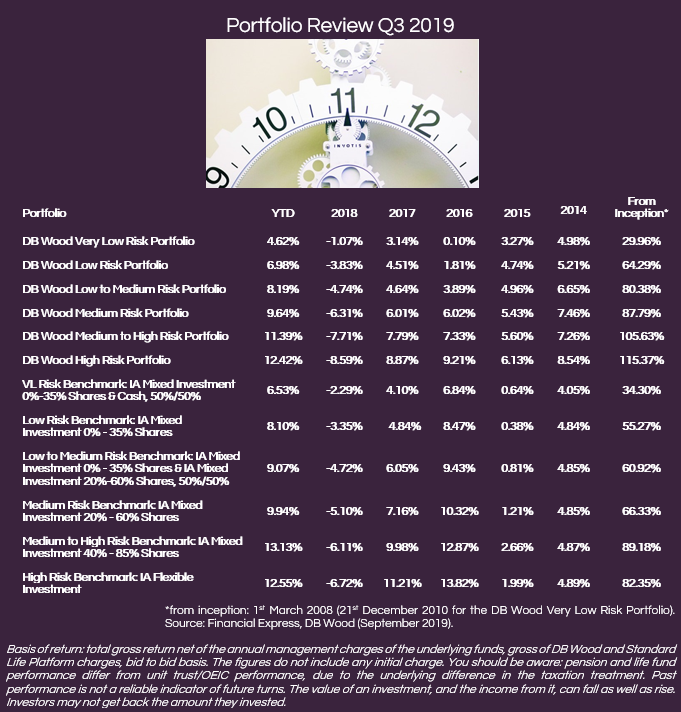 Ability and willingness – these two words are key to understanding the next step, the global economy, and its respective financial markets, will take.

The current economic expansion is now the longest on record, with more than 11 years since the last recession. Across that time, it has been severely tested on three occasions; in 2011 with the euro-crisis, in 2015 when the oil price and China banking system caused worries, and now with the trade war.

In previous cases, recessions were averted because of policy support, usually in the form of interest rate cuts and quantitative easing – a term used to describe the injection of money into the system by central banks. It is therefore not surprising that the central banks have again this year started cutting interest rates, but with them already near rock bottom, there are questions over whether the support this time will be as effective.

Our analysis suggests it won’t, mainly because interest rate cuts make less difference the lower rates are to start with. And they are low; 0.75% here in the UK, 0% in Europe, -0.1% in Japan, and 2% in the US and falling. If interest rates are at 0.75% are people going to go out and increase spending if they are cut to 0.5%? Probably not. Central banks willingness to support and boost global growth is high then, but their ability to have a meaningful effect is limited in our view.

Now the global economy probably wouldn’t need to be supported if Trump and Xi decided they wanted to strike a deal. After all, Trump needs the US economy and financial markets to be strong heading into an election year in 2020, and the Chinese are trying to manage their transition from a developing economy to a developed one. The problem is that the divides are deep, and now that China can see the US election in sight, are they really going to go out of their way to boost the chances of Mr Trump getting re-elected? Again then, whilst Trump may now be willing to make a deal, his ability to do so may be constrained.

Our base case is therefore that growth continues to slow heading into 2020. However, we do not expect a recession in the short-term, mainly due to the strong consumers globally. That isn’t to say that certain areas could head into a mild recession, but these will be selective and not on a global basis. Our portfolio positioning reflects that selectivity, with a zero weighting in European equities a key example.

Moreover, whilst again we are not expecting a trade deal between the US and China, if it does occur it could materially improve the outlook very quickly. We are therefore focused on staying balanced, but continue to hold preferences for assets that are not dependent on any specific economic environment. As such, we are still finding some fantastic opportunities in niche areas, and will continue to build these positions.

The focus of staying balanced also relates to Brexit, as we continue to ensure the portfolios are protected from any potential outcome. To this end, it is important to remember that we invest globally, and by staying away from the UK in the short-term, we have limited our client’s exposure. Longer term we remain positive on the opportunity set, but until certainty is restored either way, things will remain challenging.

Overall then, baring a trade resolution the economic backdrop looks challenging. The willingness for policy makers to support markets is high, but their ability much lower. Irrespective though, it certainly isn’t a time to become overly concerned – we are taking a more cautious approach in the short term but are instead focusing on unique ideas that will perform well whatever environment is in-front of us. To this end we remain very confident that our clients are well positioned for the months and years ahead