We came into 2019 on the back of the worst fourth quarter for certain equity markets since 1931 and the Great Depression. However, as we wrote about in January, we categorically disagreed with investors’ fears that we were quickly heading for a global recession and “often when the news is negative you find the best subsequent investment outcome”.

At the time of writing it is still true to say that a lot of the fears that caused the volatility in Q4 are still alive and kicking. Whilst there have been positive talks between China and the US on trade, we are still yet to learn about an agreement. Moreover, European economic data has continued to worsen, and the Brexit impasse is still lingering. Overall though, it is often the case that when investors get themselves into a negative spiral of worry, things only need to be shown to be not as bad as expected for things to bounce back.

To this end, economic data across the globe has generally remained robust. We have certainly seen the trade dispute hit certain sectors, but consumers (who represent more than 70% of GDP in the US for example), look to be in a good position with wages rising and inflation still relatively benign. Altogether, data would suggest a pretty normal level of growth in 2019; not brilliant, but not bad either.

We have also been talking about the withdrawal of support from Central Bankers for some time. They always had the tricky task of giving themselves enough room to support the next recession without causing it, and it looks like they listened intently to investors in Q4 who were clearly saying the world economy cannot take too much more. Specifically, the decision from the Federal Reserve (US Central Bank) to signal that it would now hold interest rates instead of raising them was an important pivot point.

It is characterising that Brexit will only represent one paragraph in this review. It has not been easy to stop the political melee consuming us, but it is also important to remember that in the portfolio context we invest globally. We will discuss the issue more in the next two sections, but to summarise it’s effects on markets in Q1, it has pushed more investors to seek safety in UK Gilts, alongside caution for those looking to allocate to UK equities. All this despite the UK economy looking in a relatively strong place.

Overall, it was not surprising to see global equity markets (as benchmarked by the MSCI World) return 9.94% in the first three months of the year after the equity market correction in Q4. They are still yet to recover the full loss from the fourth quarter (-11.49%), but they are certainly taking a step in the right direction. Other asset classes have also followed suit, with corporate bonds returning into positive territory after the negative journey provided in 2018, and alternatives also performing solidly.

So far so good for 2019, but as the year moves on, we will need more than a solid economic backdrop to sustain the strong start, more specifically we will need to see solutions to some of the core issues, in particular around global trade and Brexit.

2018 was a difficult year for all major asset classes. Quarter 4 in particular was characterised by significant declines in valuations, largely due to an expected slowdown in the global economy alongside Central Bank appetite for increasing interest rates too quickly.

We didn’t agree with the reasoning for such a marked sell off. As such, we added equity risk to the portfolios towards the end of last year, which was detrimental to our 2018 numbers as markets continued to track lower following our decision. Since the start of the year however, this has proved beneficial as markets have started to align to our views. Moreover, as the year goes on, we are hopeful that the portfolios will continue to benefit from such activity.

We have also made some notable changes to the portfolio over the first quarter. We have reduced our exposure to commercial property, which has proved beneficial as returns have slowed considerably. This asset class remains under threat from a hard Brexit and its potential effects on the UK economy. Whilst this is not our central case, we felt there was better opportunities elsewhere. For example, we have been building positions in renewable energy and infrastructure assets, as well as some property alternatives, including a social care fund that offers a more solid and sustainable return stream.

We continue to avoid UK Government bonds (Gilts). This asset class remains highly volatile, though it has enjoyed an excellent quarter amidst the uncertainty. Many of our peers continue to hold Gilts, though to us they look extremely overvalued. When Brexit is finally resolved (one way or the other) we don’t think it will be long before markets anticipate an increase in interest rates, causing these prices to correct.

Finally, we have taken a small amount of our equity risk off the table given the strong start to the year, building a cash buffer in preparation for any opportunity offered through Brexit progression. In essence, our focus remains on protecting the strong start we have seen to 2019 before growing it sustainably.

In summary then, a good start to the year, based on a lot of work in late 2018. But some of our key views are yet to unfold and are therefore, not showing in the results as of yet. This makes us positive about what is in store for the rest of this year and beyond. 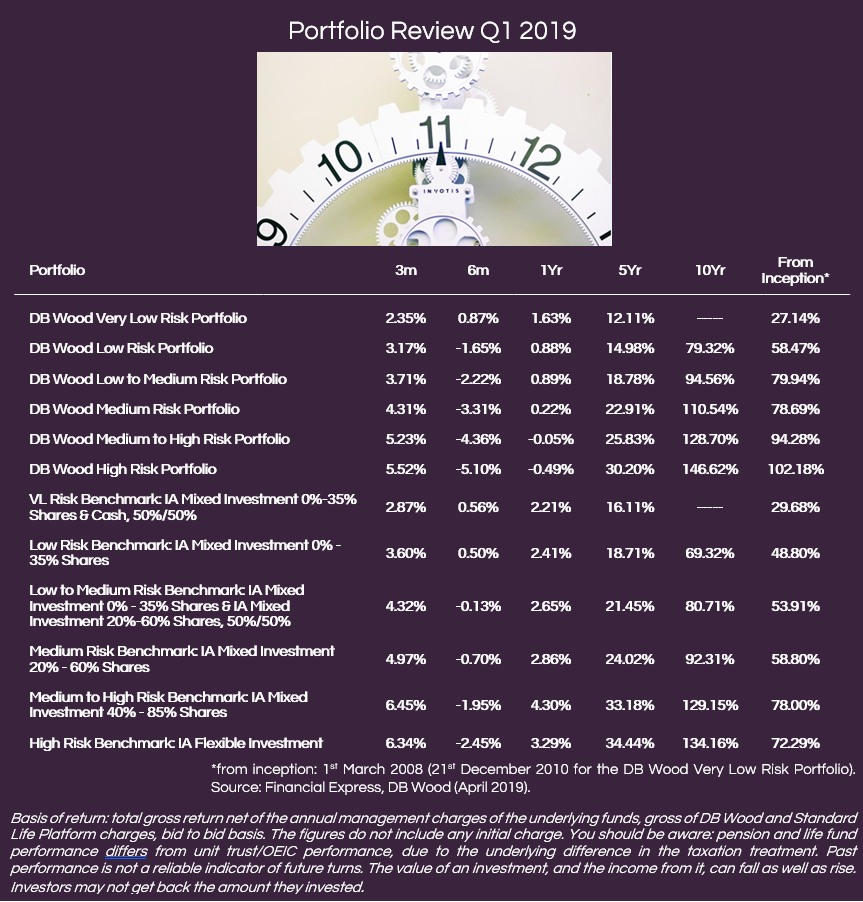 After a good Q1, investors now have to decide what happens next. They are faced with a solid economic backdrop and various known risks. Solutions to these risks certainly have the ability to propel markets higher, but it is important to be selective with asset allocation decisions, as some hidden opportunities and risks could materially change your outcome.

Starting with the most prevalent risk, in our view we are likely to get a trade agreement between the US and China at some point towards the end of Q2. We have consistently said that it is in no-one’s interest to continue the dispute, and whilst, no doubt, there will continue to be issues around intellectual property, overall this is a positive outcome for the global economy. Importantly though, this expectation is now widely held, so we wouldn’t expect a huge boost to markets once confirmed.

Central Banks now look set to keep interest rates relatively stable. In the US we expect the economy to remain positive, and this twinned with supportive policy is a good mix. In contrast, in Europe policymakers are holding interest rates to stop a recession, which we feel has a real possibility of materialising. As such, we are at a record low with our holdings in European equities, and much prefer the US within our equity bucket. If a trade agreement is reached we will also be looking closely at adding further to Asia, particularly in the Emerging Market space where valuations would look even more attractive.

Here in the UK, we remain of the view that the economy will sustain its steady footing. If we do achieve some Brexit certainty, then there could be a material pick-up in activity through the end of the year. With consumers in a strong position after the fall in petrol prices and rising wages, the government ready to spend (called the “deal dividend”) and business investment waiting for certainty, all the stars are aligned. Now of course, should the UK end up requiring a long extension (or a no-deal), this would not materialise for some time. Nonetheless, overall, we feel more positive about the UK economy than most and believe there could be strong returns here if some form of certainty is restored.

Perhaps more important is the outlook for low risk assets though, which remain extremely expensive in our view. This is a factor of the uncertainty, as investors flood into areas they perceive as safe. If, as we expect, things become a little clearer, both here and abroad, then we would expect these assets to fall in value. But for now, we are happy holding a larger weighting to cash than we would otherwise, waiting for opportunities to materialise here.

Given the low weighting to traditional low risk assets, our Investment Committee have been working extremely hard to find new and innovative ways of achieving diversification. Two such examples are a unique infrastructure opportunity (link to our blog HERE) and a Social Care based property fund. Both of these offer very different journeys to the traditional asset classes, and both are driven by longer term supply and demand themes.

It is pleasing therefore to finish this update on a positive note. The global economy is not without risks, but there are also opportunities, and our more flexible mandate allows us to be extremely selective. We remain focussed on protecting the good start to the year but are also alive to the fact that volatility will likely continue, and just as it did in Q4, will produce opportunities that we will be working hard to utilise on our clients’ behalf.

Subscribe
You make the most of your money in a bear market, you just don’t know it at the time!

“Bull” and “Bear” markets are characterised as rises (bull) and falls (bear) of over 20%. They get their names from how the animals attack …

A Stay at Home Recession – An Update from our Investment Committee

It has been another incredible week in investment markets. Perhaps the most violent (from a volatility perspective) in history. All assets have moved in extreme …