The world we live in never ceases to surprise us. Reflecting on our New Year’s resolutions we’d be forgiven for thinking that leaving the European Union would be the biggest news event in January. As it happened, other than some pics of Boris and Big Ben on the 31st Jan, it passed most of us by, with the media instead focussed on a rogue health emergency out of China.

At the time of writing, the novel Coronavirus has infected over 31,000 people globally (99% of those in China) and caused 638 fatalities. Compared to other previous epidemics like Ebola, which had a mortality rate of 70% (so far this has a rate of 2%), it is far less dangerous, but it is also more contagious; the main reason for concern.

But it is not the characteristics of the virus that has caused markets to fall by around 5% since the 20th January. Instead it is the economic implications. Wuhan, the city where the virus originated is pretty much in lockdown. To put it into context, imagine London, where less people live, with transport links shut, food in low supply, and workers struggling to complete day to day activities; rolls of toilet paper are even unavailable from supermarkets. Travel globally is largely compromised, supply chains disrupted, and I doubt many people are rushing to book their holidays with the uncertainty around how far this could spread. The cause for concern about a global economy that grew at its slowest rate for more than 6 years in 2019, is therefore real.

However, whilst this is certainly an economic headwind for the months to come, our expectation is that this will not make a material difference to the longer term outlook. Specifically, we have been reassured by the decisive action of policymakers, as they have quickly curbed travel arrangements and more recently injected liquidity into financial markets. The hope is that greater short term disruption reduces the chance of a more drawn out economic strain.

Nonetheless, as with any complex global issue, we are acutely aware that we could be wrong. As such, the portfolio range is well diversified, with minimal exposure to the worst affected areas. To demonstrate, all six of our portfolios posted a positive return of around 0.5% in January, compared to wider equity markets which lost 3.35% (FTSE 100 used as an approximate benchmark). This type of journey is what we pride ourselves on, as we aim to reduce downside risk in order to produce a more sustainable ride. 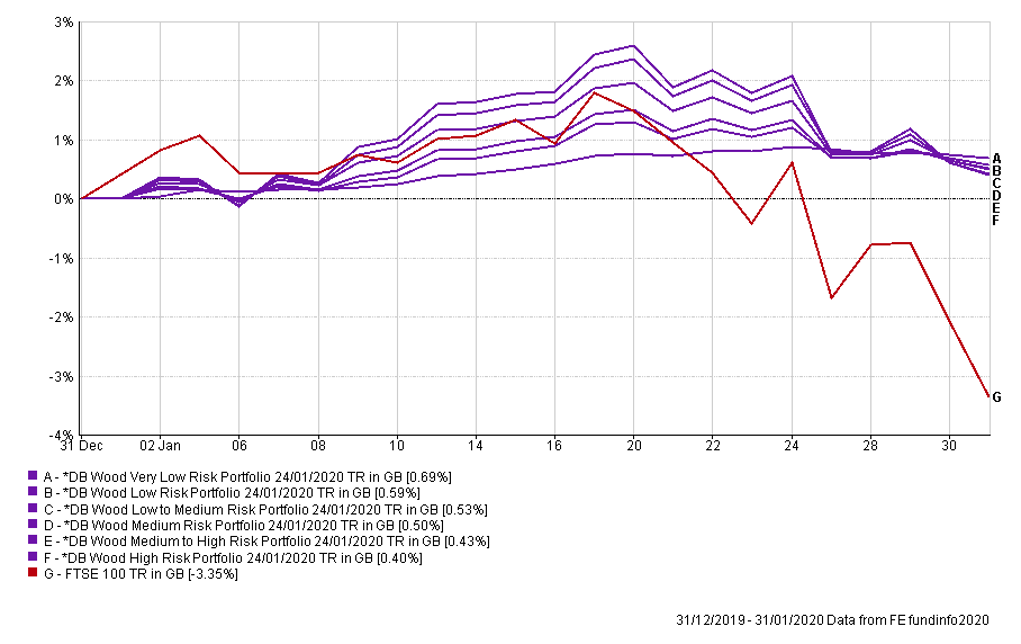 Coming back to the aforementioned elephant in the room, Brexit. We are no longer part of the European Union. All eyes will now move to trade negotiations, as both sides approach an ambitious 11-month deadline. A lot can change between now and then, although to start there is little doubt there will be a difference of priorities and some conflicting headlines. For now, markets are reserving judgement, hoping that commons sense prevails, and we do not face another cliff edge in December.

If there is one thing that both cases have in common, it is that considered policy decisions can make all the difference. Nonetheless, just as we always do, we will be making sure your money is well placed irrespective of what happens.