Negotiations with the EU nearly always go to the wire. The Brexit process has followed the same predictable pattern of huffing and puffing, though it remains possible that a last-minute compromise will emerge. After all, it always does, right?

To start, it’s important to remember that, from an economic perspective, a deal is massively in the interests of both sides. Additionally, after over 40 years of membership, UK standards on virtually all goods and services are absolutely aligned with EU standards. This means that most of the practical impediments to agreeing a trade deal simply do not exist. Former Government Minister Liam Fox famously said that coming to a Free Trade Agreement with the EU should be “one of the easiest in human history”, and Boris Johnson’s 2019 Election Campaign described his Brexit Deal as ‘Oven ready’. So why isn’t supper ready?

The current impasse and the recent increase in negative rhetoric from each side makes it feel like another miraculous U-turn will be required. It seems that the EU don’t like what the UK has on the menu, and for their part, the UK are refusing to change the menu on the basis that the EU was quite happy to have that meal with Canada and Japan, so why not with the UK? In simple terms, political battles are over-riding economic common sense.

The UK Governments’ red line is that any agreement has to be a ‘sovereign’ free trade agreement, where the UK is recognised as an independent country and is free to make its own laws without being subject to EU court determinations. It says it wants a similar Free Trade Agreement to those which the EU has negotiated on a number of occasions in the past – with the aforementioned Canada and Japan, for example – allowing frictionless and tariff free trade to continue.

However, the EU wants to maintain control over British waters/Fisheries, State Aid rules, and impose a so-called “Level Playing Field” amongst other things, which means they will continue to control the rules of trade and regulation. The EU has refused to negotiate on anything else unless the UK agrees to all of this, which they are currently refusing to do.

So with no meaningful progress at all in the last 9 months and a mere four weeks until the crucial European Council meeting on 15th October (which is widely viewed as the last opportunity for a deal), a substantial free trade agreement has been looking very unlikely.

But the drama doesn’t stop there, as last week, to increase the pressure further, the UK Government published (and voted through) the “Internal Markets Bill”. I won’t bore you with the detail, but the negotiation strategy is clearly to reaffirm they are prepared to walk away without a deal if necessary, hoping it will encourage the EU to be more flexible in their approach in the short time left. The immediate response from the EU was predictably hostile and called on the UK Government to withdraw some of the Bill “in the shortest time possible and in any case by the end of the month”, threatening legal action and saying it would make it very difficult for talks to continue. It’s hard to see how relations could become more tense at this point…

Where does this leave us… well, theoretically, there are still four possible outcomes to the talks – an extension to the Withdrawal Agreement (meaning that Brexit is effectively deferred or cancelled); a comprehensive free trade agreement; a more limited agreement, or no deal (the two sides trade on World Trade Organisation terms from 1st January 2021).

Not surprisingly, our central case is that that no deal has now become the most likely outcome (50%) followed by a limited agreement (30%) with there being a 10% chance each of an extension or a comprehensive agreement. On the latter two, an extension would be politically unconscionable for the UK Government and there simply does not appear to be time to facilitate a comprehensive agreement, even if both sides wanted to.

It is possible with political will for progress in the talks to be made quickly, and within the next four weeks, we will discover if both sides are prepared to compromise with a limited deal; perhaps to minimise disruption to key industries but falling well short of the comprehensive agreement that was earlier envisaged; but we aren’t hanging our hat on it, and the DB Wood Brexitometre is notching towards no-deal. 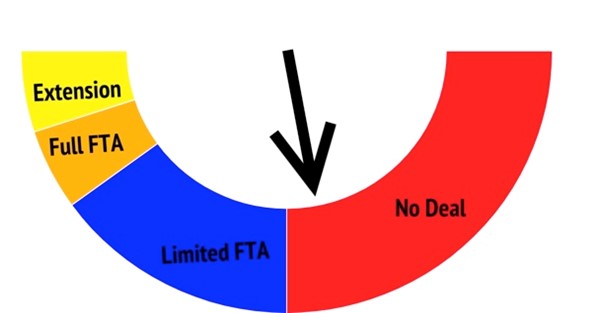 Regardless of what (if anything) is agreed, it is a huge task during the next four months to prepare for the future relationship by the end of the transition period, and so it is very likely that there will be additional headwinds for the UK economy. Thankfully, we are able to invest on a global basis, and as such we have run our portfolios underweight to the UK for most of 2020, and are presently the most underweight we have ever been since inception. We will continue to monitor the UK equity market and the strength of sterling very closely. We believe we are positioned well for no deal, and indeed for any buying opportunities if Sterling weakens considerably, or the landscape changes unexpectedly in favour of an unlikely agreement. We’ll keep you updated as our Brexitometre swings over the coming few weeks and months, but for now, we are left wondering what might be for supper.