We’ve all quickly become accustomed to disruption and volatility. Before Q3 had begun, this year had already encompassed the quickest 30% market fall, and the fastest 50-day rally, in market history. As economies continued to re-open over the summer, the corresponding economic recovery started to pick up, but as the quarter matured, it became clear the disruption is far from over.

Investment markets traded sideways for most of Q3, initially reflecting an improving economic picture as freedoms were released, but then latterly recognising the ongoing uncertainty heading into the winter months. Global equities returned just over 3.1% over the three months, with the UK equity market a laggard, falling 4%. Bond markets were also sanguine, returning next to zero, with a similar situation in commercial property. A pause for breath then, is an apt description of the investment landscape.

However, we have been talking for some time about investing in a world without a vaccine, and despite overall markets being relatively flat, there were some large divergences beneath the surface. Sectors that have been worst hit by the pandemic, such as retail, travel and leisure continued to struggle, whereas those that benefit more, such as technology and healthcare, continued to excel. It has been a market of two halves, in that respect.

So, we have found ourselves with a global economy that stubbornly wants to recover in the face of a crippling pandemic, and a stock market that is heavily split into the stocks that can perform well in this environment and those that can’t. How much further can the red-hot stocks go, and when do you enter the world of opportunity that might surround the airline and tourism industries, for example?

As ever, investment markets look ahead to try to forecast what might happen. In quarter three, markets have been grappling with what quarter four might bring, and to that end its sure not to disappoint. We have the US election and Brexit talks, as well as the progression of the pandemic to thrown into the mix. Fans of uncertainty have not been disappointed so far this year, and the next 6 months in particular looks set to provide yet more twists. 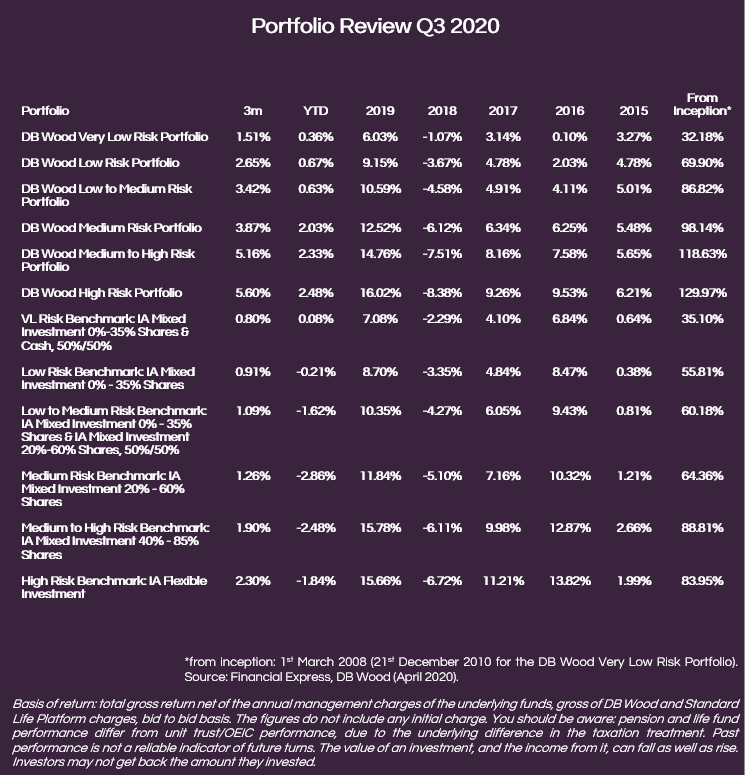 It is pleasing to see all portfolios in positive territory for the year, especially with the wider UK equity market (as benchmarked by the FTSE 100) showing a -20.21% return. All portfolios are also significantly above benchmarks year-to-date, with an average improvement of 2.9%, so both absolute and relative outcomes are looking strong.

Quarter three in isolation was a quiet one for activity, as we made just three tweaks to the portfolios compared to 17 across the first two quarters of 2020. Volatility was much higher in the first half of the year, which gave us a lot of opportunities to take advantage. The last three months was therefore more about sitting back and allowing those changes to play out.

We have continued to run the portfolios light on UK allocation since the pandemic started, though our further reduction in Q3 helped our outperformance. The UK has struggled more to regain economic traction, and the Brexit noise was always going to be at the very least a near term drag. We have also been vocal on our sector positioning (your probably bored of that story now), but its continued to work as the sectors with less Covid-19 disruption have significantly outperformed those with more. Overall, as the chart shows below, we are most pleased with the portfolios’ ability to continue to generate positive returns over the last few months, despite most asset classes offering flat or negative outcomes: 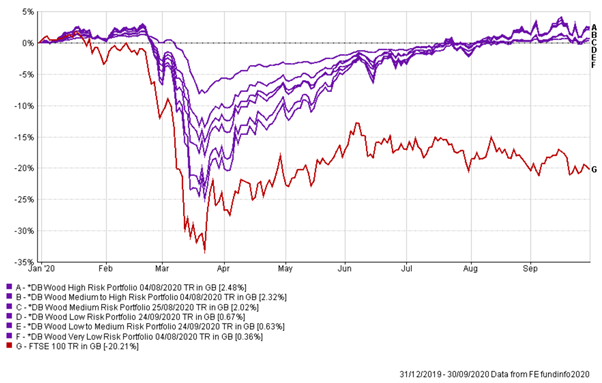 As we approach the final quarter, we’d caution against being concerned if volatility picks up again. It is something we are always prepared for, and can use to our advantage, just as we did in the first half of this year.

After a more relaxed quarter for markets and portfolio management, we are now entering a very interesting 6 to 12 months that will to a large extent shape the next 3-5 years. In the short term we are going to hear from vaccine trials on their ability to solve our current crisis, from Brexit negotiators on a hard or soft split from the EU, and from US voters on where they place their trust for the next four years.

Our base case is that a vaccine will not appear in 2020, though, through a combination of some herd immunity, more efficient testing, localised lockdowns and better treatment, the effects of the virus will become less damaging to economies. A vaccine is not without possibility, though it is by no means a given, so we wait in anticipation of trial results.

Our view is that the UK will split from the EU at the end of 2020 with a thin trade deal, but little else. This hopefully will be sufficient to keep tariffs off imports and exports, which should be enough to keep currency markets calm. Negotiationsare sure to go down to the last minute though, creating some short term volatility until the outcome is finally known.

In the US, polls suggest that Joe Biden will be elected US President, though Political polls don’t have huge predictability, so he won’t be counting his chickens yet!

We expect then that if our central case plays out, that we will see a continuation of the growth in markets and sectors that we have seen more recently. Whilst certain stocks in particular look overpriced, Tesla and Apple to name just two, we should remember that with interest rates at around zero and inflation looking subdued in the near term, the earnings of these companies may well drive their valuations higher still. Certainly, we expect to see the UK continue to underperform in the short term, so we are likely to stay overweight elsewhere in the world, where the opportunity set looks clearer. There will be a time to return to the UK, though it is not yet.

Timing is hard to pinpoint then, we do think the current phenomenon will change quickly at some point and therefore it is important to keep abreast of economic data, and vaccine news, which might see a quick rebound in some areas where there is potentially incredible value. In the absence of a vaccine however, we would not be surprised to see recent patterns continue over the coming months. Suffice to say we have a range of triggers based around all sorts of different scenarios, with an action plan tied to each in terms of portfolio changes that may be required.

As we ponder the close of 2020, one thought that remains is the overall sense of uncertainty that we have all felt. Uncertainty about our economies, about our health, about education, and careers. In the end though, this will all drive positive change, and ultimately, whilst there will be winners and losers, we are confident there will be a healthier world at the end of it. However as with all deep recessions, there are casualties, so being mindful of this, it is crucial to remain heavily diversified from an investment perspective, and to ensure that our portfolio’s as well as our lives remain robust and ready for the opportunity that awaits.